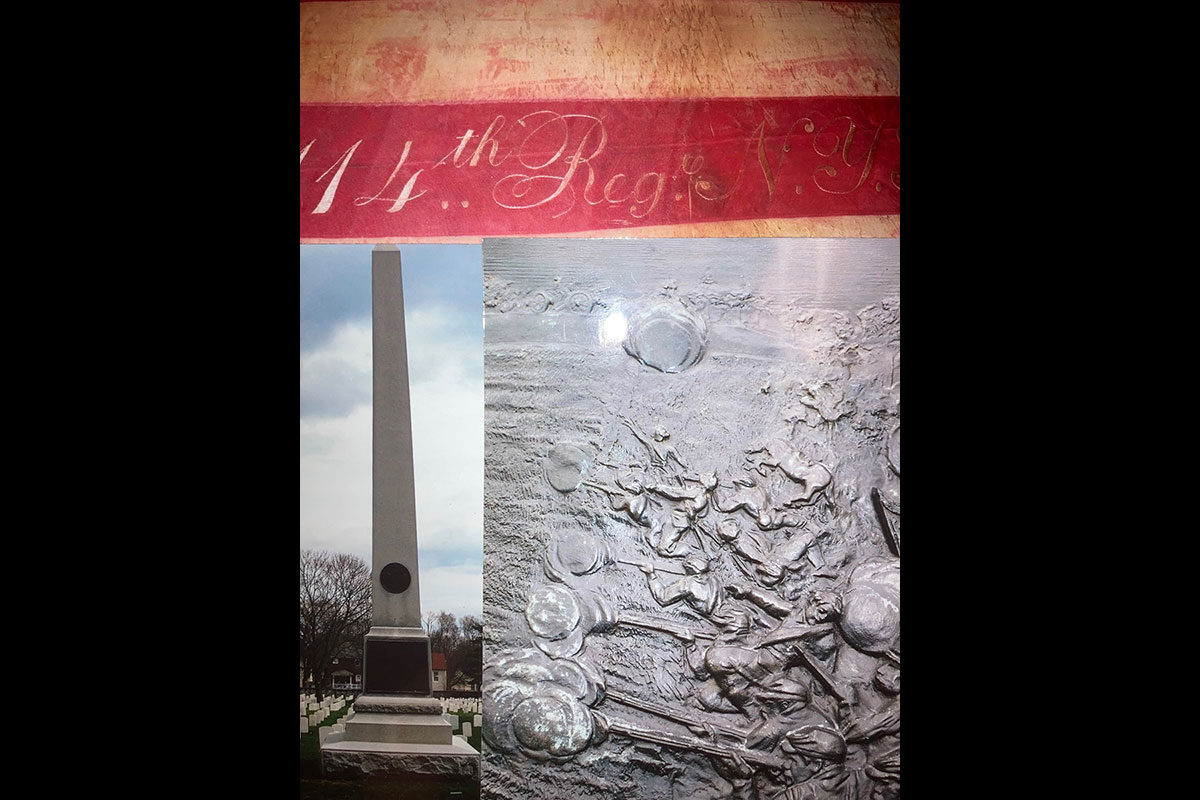 114th NY. Vols flag and monument with bronze plaque at the battle of Winchester

William Griffin was sold as a slave for a $1,000 on the auction block in Louisiana but was freed when the 114th New York Volunteers marched through. He worked as Lt Breed’s helper and Lt. Breed kept a close account in the back of his diary as to how much William owed from his salary as he drew a hat and clothing for him from the Commissary. On October 19, 1864, just before the battle of Winchester Lt Breed said, “William, go and fill my canteen for me as this may be the last time you ever do this.”

That day when the Union center gave way and was routed, the 114th N.Y. was told to go out in the center of the field and hold at all costs. They held for 45 minutes, surrounded on three sides by the enemy, alone, at a terrible cost of over half their unit. When they retreated back to the tree line the army had been able to regroup. They were told to counterattack, which they did, but with all the color guard shot down and almost all the officers, Lt. Breed, picked up the regiment’s flag and held it at the fence line. He was shot and killed holding the flag. The Union’s counterattack and they won the battle.

William went looking for Lt. Breed that evening but instead found Sergeant Dan W. McKinney of the 114th, lying on the ground and bleeding out shot through the leg. He was one of the biggest man in the 114 at six foot three and weighing about 200 pounds.

William said “What are you doing here, Sargeant Kinney?”

“Will, I am wounded and am getting ready for the night’ was the reply.

“You can’t stay there. You must go to the hospital.”

“You have got to go just the same,” and then the young fellow picked up Mr. Kinney’s musket and knapsack and carried them off, and returning took him
on his shoulders to the hospital, a mile away.

On the anniversary this year Mr. Kinney sent his photograph to his rescuer, whose name is William Griffin, and who is now a blacksmith at Georgetown, N.Y. On the back of the card he wrote: “Will, I am the same fellow that you carried to the hospital 27 years ago today. I am past 60 and tip the scales at 237 pounds. You could not carry me
now as you did then.”

Friday Mr. Kinney received a cabinet photograph of Mr. Griffin who says: “I am the same fellow that I was 27 years ago, only a little older. I was 42 last March. Under like circumstances I could carry you today, if you do tip the scales at 237.”

“Will,” as Mr. Kinney calls him, was as illiterate as a boy could be when he was picked up in Louisiana, but during camp life he got hold of a spelling book and Mr. Kinney taught him his alphabet. At the close of the war he could read nicely. He went to New York and received a fair education and is now a well-to-do blacksmith.

It is interesting how these two men were linked in life together, they also died within a year of each other despite their age difference.

On May 9, 1894, the remains of the late Dan W. Kinney were laid to rest at the village cemetery, after the prayer of Rev. J. A. Platts and a quartet singing “Abide with me.” A large number of people followed the procession.
(Brookfield Courier, May 9, 1864)

–Will Griffin, the colored blacksmith who recently died at Georgetown, was a slave when the late war commenced and had been sold on the auction block for $1,000. He was with the 114th a year or so and came back with the survivors, learned the blacksmith trade and settled in Georgetown. He was of lusty frame and cheerful disposition, and died at the early age of 45. Griffin resided in Leon-ardsville for a time.