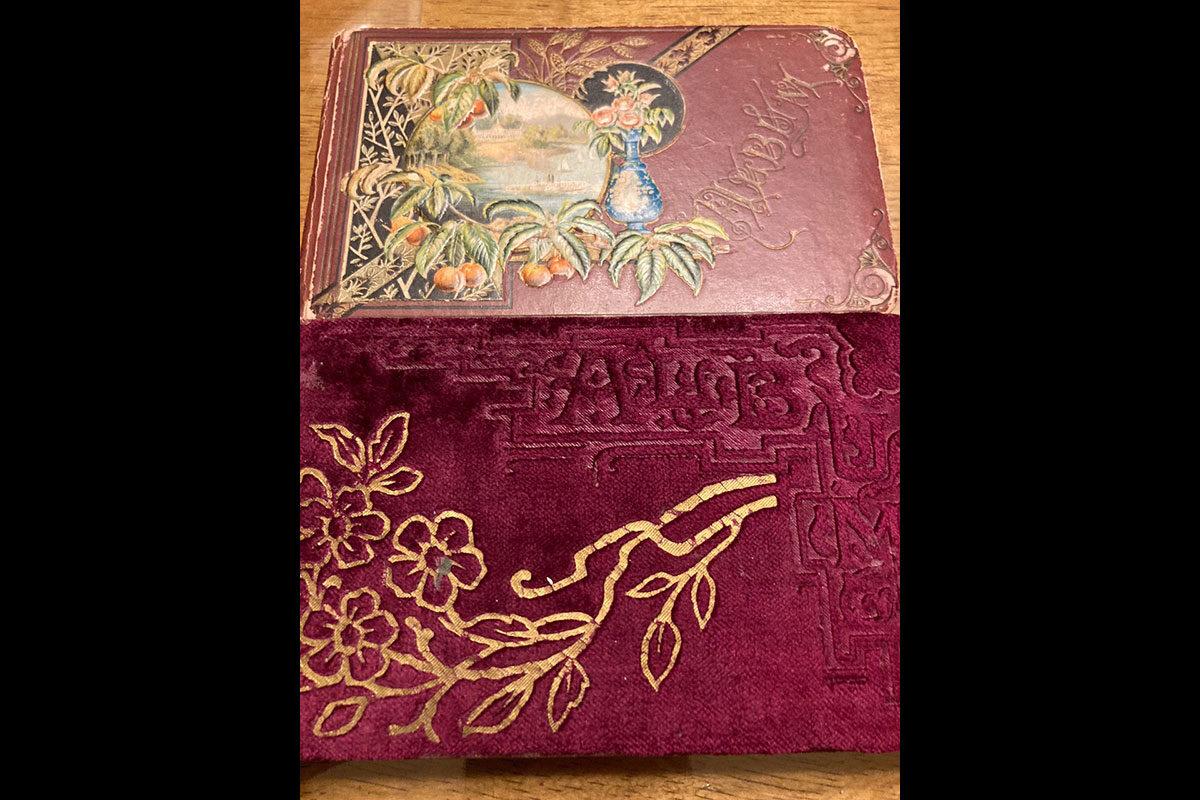 Two months ago I was browsing in an antique store in Tuscaloosa, Alabama, and found a rectangular red autograph album with about 30 entries to Omar. I was intrigued by it and read some of the entries from 1885, as the entries started in Marysville, Kansas, but then most came from the people of Conesville, Schoharie County, N.Y.

On a whim I bought the album and wondered if it would be possible to locate this stranger from 137 years ago. As I walked to my car where my wife was waiting I appreciated how the storeowner had discounted ten dollars off the price. That made me turn around to go back to buy another autograph album (1890) addressed to Velna, sitting beside Omar’s on the same shelf with over 40 entries, and the first ones starting off from Middleburgh, N.Y. When I got home I checked on a map and Middleburgh was only about 20 miles from Conesville and I wondered if these two might have known each other.

I transcribed the album and as I read about Conesville I was impressed by the 200 year-old Richtmyer Tavern and Richtmyer cemetery and hoped this meant I could track Omar’s down. The Town Clerk at Conesville put me in touch with the Town Historian, Kimberly Young, who is a wonderful detective and a wealth of information about the Richtmyer family and their history. Her love of history brought Omar Richtmyer to life and I hope you enjoy stepping back in time 137 years to rural New York.

The first three entries in Omar’s autograph book were written by the Miller family who came back to Conesville, Schoharie County, New York for a Christmas celebration with family. There had been a migration west by many members of Schoharie County when families grew larger and there wasn’t enough land to support them. The Miller family settled in Marysville, Kansas and E. L. Miller did well as a farmer. At the World’s Fair, 1904, his timothy seed won a silver medal.

2. Christmas 1885
Who loves his work and knows to spare,
May live and flourish anywhere
With love.
Mrs. E. Lee Miller Marysville, Kansas

3. May you live to enjoy many
Merry Xmas days.

4. West Conesville Dec. 27 /‘85
Friend Omar:
For man to
think he is going to do the
work of a life-time without
meeting with obstacles is to
dream in the lap of Folly.
James F Taverre(?)

5. My Son let truthfulness and
Honesty be your moto through life
Is the wish of your Father.
Conesville Dec 29 1885.
A.F. Richtmyer

Abraham Ferguson Richtmyer was the grandson of one of the earliest settlers, Peter Richtmyer.

Abraham F. Richtmyer was the Justice of the Peace for Conesville so truthfulness and honesty would have been very important to him. He was also a farmer and when he died in 1920, he was buried at Manorkill Cemetery.

The former town historian Beatrice Martine wrote a history of the Richtmyer family for their reunion in 1998. She described how Ury Richtmyer applied for and received a patent for 8000 acres in 1753 and established the first settlement with a few families in 1764 in southeastern Schoharie County, New York.

Peter Richtmyer had cleared a large amount of land at the start of the Revolutionary War. Unfortunately when a group of Tories and Indians came by he was captured but his family was left behind and his house burned after they ransacked it. They marched him to the house of a Tory, “the Tory’s wife maliciously told the leader, “It would be easier to carry scalps than prisoners.” Peter was not bound but watched closely. When called up to turn in for the night, he jumped to escape and was confronted by a Tory, with a musket pointed at his chest. Seeing the gun was his own, with a worthless flint, he pressed on past the Tory and was urged on by the fruitless click, click, click of the old gun. He returned to his home on the fifth night. After finding his anxious family, they hastily packed a few possessions and pushed on that very night for one of the forts along the Schoharie where the family remained until the war was over. “

He served under Captain Hager and was appointed Second Lieutenant in 1778. He returned to his burned out homestead and built an inn in 1784 and later built the Richtmyer Tavern in 1789 with its impressive columns that is present today, over 200 years later. The tavern did a booming business when the turnpike opened up in 1800.
The rural township developed into three towns, West Conesville, Conesville and Manorkill with the Manorkill stream flowing through. The town of Conesville was named after a respected minister, Rev. Jonathan Cones.

My Son sins go not alone
But follow one another as do
The links of a chain.
Written by your Mother.
Ann Amelia Richtmyer Dec 29th 1885

On May 3, 1871 Abraham F. Richtmyer married Ann Amelia Layman at Conesville United Methodist Church. She was the daughter of Jacob Elias Layman (1809-1873) and Fidelity A. Hazelton Layman (1811-1882). Ann Amelia Richtmyer passed away in 1926 shortly after the visit of her son, Omar.

7. Omar,
May happiness be thy lot and peace thy steps attend,
Accept this tribute of respect from one who is your friend

8. Friend Omar:
Wisely improve the present,
It comes not back again, time
once spent is gone forever.
Your schoolmate
H. A. Monfort
Jan. 5, 1886 Gilboa
N.Y.

9. Friend Omer:
“May you have just enough clouds in life
To make a glorious sunset.”
Jan 16, 1886 Your Friend
Nettie Lawrence
Manorkill,
N.Y.

10. Omar:
Remember well, and bear in mind.
That a good true friend is hard to find;
And when you find one just and true,
Change not the old one for the new.
Your cousin
Laura H. Patrie
Conesville.
Jan 17th 1886

Laura H Patrie was the sister of Mabel C. Patrie. She died in 1894.

Mrs. D. (David) N (Newell) Patrie (born March 7, 1842), was Clarinda E. Layman, the sister of Ann Amelia Layman Richtmyer. The loss of her daughter’s death Laura in 1894 hit her hard for several years but she rallied and joined the M.E. Church in 1997, and was very active. She died after a four day illness on September 9 , 1907, and was buried at the West Conesville cemetery.
Her obituary also referenced flowers.

“Mild and gentle as she was brave,
When the sweetest love of her life she gave,
To simpler things where the flowers grew,
Pure as the eyes they were likened too.
The touches of her hands have stayed
As reverently as the lips have prayed.
Think of her still the same, I say
She is not dead, she is just away.

Study not so much to show knowledge,
as to possess it
D. N. Patrie
Conesville
January 18th, 1886

David Newell Patrie married Clarinda E. Layman in 1870. They were married for 37 years.

13. Omar,
Time once past never returns
May you so live that you may
rightly improve the present and
reap a rich reward here after is
the wish of your friend

Winslow P. Patrie was the only schoolteacher for Conesville listed in the Directory of Schoharie County in 1872-73.

As you sail along o’er the wave of time,
May your bark no tempest meet,
But safely glide with the changeing tide,
To Heaven the safe retreat,
Ida Layman
Prattsville, 4-14-1886

She wrote this opposite the picture of a rowboat on a lake. Since Omar’s mother was a Layman they were probably related.

(Could she be related to Velna Case?)

May kindness ever be
The ever prompting thought
Then others by you will see
A useful lesson taught.
Jos. Ehsus(?) Lewis

17. Love Dear Brother
We say it for an hour or for years
We say it smiling, say it choked with tears
We say it coldly, say it with a kiss,
And yet we have no other word than this
Good-by”
Mary E. Richtmyer
April 29, 1893 Manorkill

On same page in blue ink, different handwriting
This leaf belongs to little?
May who wills write on it some
Future day if she lives
A.F.R. Dec 29th 1886

Did his father try and reserve this page for a future wife but his sister wrote in it seven years later? The page is opposite a picture of two lovebirds sitting on a branch.

Mary (nicknamed Mattie) was only nine years old when she wrote this poem about love in 1893, so maybe she didn’t realize this page was reserved. She married Leon S. Cuyle on April 26, 1906, when 22 years old. Leon Cuyle served as the Town Supervisor of Conesville during the 1920s.

Their tombstone at Manorkill Rural Cemetery

From Harry D Stryker
(A colorful sticker attached to page says, “Ever faithful and true.”)

19. Friend Omar
May your air and deeds be
Ever pure and white, as the
Paper on which I write,
Is the wish of your Uncle.

(Written on the last page of the album)

21. Omar:
“If scribblings in Albums,
Will remembrance serve
With the greatest of pleasures
I’ll scribble in yours.”
Your School mate
Maggie M. Mattice
Conesville, Dec 15th, 1887

Remember me when this you see
Though absent from your sight
And I will do the same by you,
With pleasure and delight
Your Schoolmate.
Hattie Travis

When on this page you
chance to look just
think of me and close
the book. Your friend
Barret S. Travis
Conesville
Sch. County. N.Y.
(Colorful bouquet of flowers sticker glued on states, “Kind regards”)

24. To Omar,
Be kind To all Be intimate with few
And may the few Be well chosen
Mrs. Nancy Travis
Conesville,
March 18, 1888

May your joys be as deep as the ocean
And your sorrows as light as its foam
J. E. Brainerd

26. “For the structure that we raise,
Time is with materials filled:
Our to-days and yesterdays
Are the blocks with which we build.”
Inez Buck (Brick?)
Conesville,
May 11, 1892

27. Omar,
May your life be fine as snowfields
where our footsteps leave a mark
but not a stain
Frank Richtmyer
Manorkill. 4.9.1894

Remember me when far away,
If only half awake,
Remember me on your wedding day,
And send me a piece of cake.
Ellie Russel.

(Possible reference to the upcoming show on August, 1901, when Buffalo Bill brought his troupe to Buffalo, N.Y. for the Pan American Exposition. All his horsemen and Indians performed twice a day with admission 25 cents for children, and 50 cents for adults. For a week it was a roaring success with huge crowds until President William McKinley was critically wounded on the grounds by an assassin and died shortly thereafter. Bill Cody closed up his show and left.)

When the name that I write here is
dull on the page
And the leaves of your album are yellow
with age;
Still think of me kindly & do not forget
That wherever I am I remember
you yet. Lovingly yours
Sister Matie

This was his younger sister Mary who wrote earlier in his album, but she was nicknamed Matie. It is ironic that now the pages of his album really are yellow with age at 135 years old.

After reading his entire album I couldn’t tell if Omar ever met Velna.

If you know any information on these people please send it to me.

Join me next month as we open up Velna’s book.